Melbourne Victory captain Carl Valeri has been able to make a U-turn to sign a one-year contract with the club until June 2019. His decision to reverse a potential exit came around just a few weeks after the club romped to their fourth title in May. The midfielder was expected to leave the club at the end of the last season when the club managed to win the championship by getting away victories over Sydney and Newcastle. Even though Melbourne Victory were keen on keeping the player for another campaign, the veteran was not ready to sign a new deal. 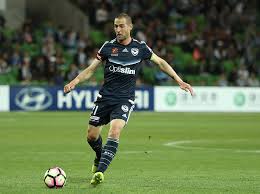 As Melbourne Victory took to the field for the Grand Final, it was still unclear if the player would be staying on. Now, he has revealed that manager Kevin Muscat played an influential role in convincing the player to stay at the club beyond the campaign. One of the reasons forValeri delaying his decisionby a substantial period is the concerns about playing them that he would receive in the 2019 campaign. At 34 years of age, he may not have much to offer in the game and there was a danger of the captain being sidelined. Now, it appears that Kevin Muscat has given him enough guarantees that he will remain as an important member of the squad.

“I went away and the boys kind of talked me into it in the end.I was able to take that time, I was very lucky and very fortunate and not many players have that luxury.[Coach] Kevin [Muscat] supported me through the whole thing. He said ‘there’s something there for you. Let me know your decision.’ The club supported me. If I’m not 100 per cent then I didn’t want to be baggage,” said the player after signing the new deal.