Former Juventus striker Sebastian Giovinco, who has been at MLS outfit Toronto FC since 2015, has finally left the club. He proved himself to be a really phenomenal player throughout his time in the Major League Soccer. 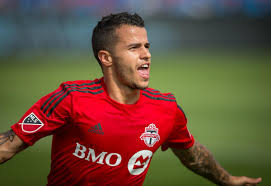 Spending four years at Toronto, Giovinco has engraved his name in the club’s history books after becoming their all-time highest goal scorer. He achieved this amazing feat after registering over 83 goals from 2015 to 2019.

The Italy international will look back at his landmark achievements at Toronto FC one day in the future and can give himself a pat on the back for his exploits.

Following his move to Al-Hilal, the 32 year old thanked his former teammates and the fans for the four years he spent at their club, saying he will never forget the way he was welcome when he first arrived.

Giovinco also appreciated the club for helping his transition to another phase in his career, after his move to Saudi Arabia.

Totonto general manager Ali Curtis conceded that losing a player like Giovinco was never going to be easy for the club, acknowledging it will be very difficult to find a replacement for the Italian.

Curtis however revealed that the club are already making plans to complete a new “designated player” signing in the near future – one who will hopefully go on to reach the heights of Giovinco at the club.

Immediately after the move, the Italian striker took to his Instagram page to post a very lengthy message for the Toronto FC fans as well as several photos with a number of his former teammates.

Toronto FC fans will wish him the best for the future, hoping he can replicate his performances for them in Saudi Arabia.