Minnesota United FC visited the Pacific Northwest, a place they have had a huge lack of success in, for the third and final time this year. 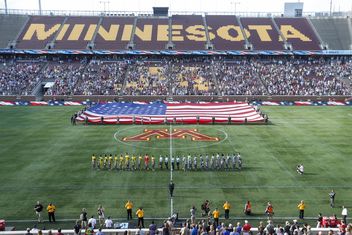 Coming into this game MNUFC had lost to both Portland and Seattle by a combined 9-1 out west, and that luck didn’t change tonight.

The Loons were short a few players as Francisco Calvo was back home in Costa Rica as he and his wife welcomed their newborn son into the world a few days ago. Kevin Molino was out due to illness while Christian Ramirez started the match as a sub, as he is still recovering from a hamstring injury suffered in July.

In normal fashion for a MNUFC match, the opponents started off dominant holding possession for most of the first five minutes.

In the 5th minute the Whitecaps Marcel de Jong fired a beautiful long pass from the midfield line to the top of the box where Yordy Reyna took a touch and chipped it over Bobby Shuttleworth for the first goal of the night.

A few minutes after the goal, the Loons earned a corner that resulted in a Johan Venegas header that would miss high and wide left. The final 10 minutes of the first half had a good amount of fouls that was all capped off with Michael Boxall getting a yellow card for unsporting behavior in the 45th minute.

In the 88th minute, Vancouver would wrap it all up with their third goal of the night as Freddy Montero sent a cross in that Brek Shea finished with a header. A few minutes later the match finished up with Vancouver the winners 3-0.

Minnesota United FC will face Montreal Impact this Saturday at Saputo Stadium in Montreal before coming back on later this month for their second to last home game of 2017.